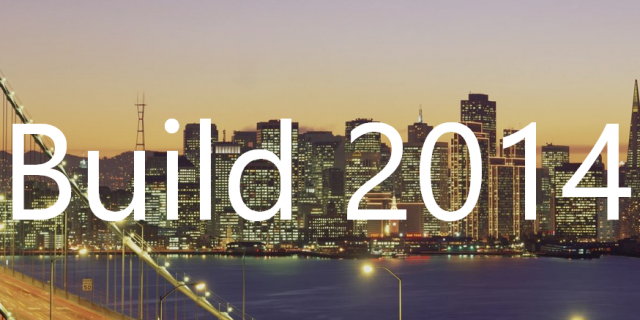 Finally, I had time to watch Build 2014 sessions. Here are the best I have seen.

This session is intersection of Computer Science and programming. It will really makes you rethink your approach for solving problems and writing code. One of many interesting thoughts mentioned by Leslie Lamport was a role of specification. It is hard to disagree that in case of very complex code, need for change, after a few months or years, or by other programmer, will cause rewriting code for scratch if we do not have specification. I am recommending this session, because it is not demo of some new Microsoft tool/technology, but a solid piece of knowledge. It is not session for everybody, some may not like it. I love it!

Windows and the Internet of Things (Steve Teixeira)

This session is about writing Software for devices. But not only for PC, tablet or Phone. Also for embedded devices, or customized devices running on Windows Embedded. It is an overview of the future. Not only in Windows World, but at all. Steve Teixeira shows cool demos. E.g. controlling traffic lights using the Phone. He presents Intel Galileo, board which you can get for free by signing up! Only limited number available.

Visual Studio in Web Browser? I'm in! I am very impressed with progress which is being made in online version of Visual Studio. In addition to simple edits, there is a command line access, intellisense, git integration, side by side file comparison and more.

What's New for ASP.NET and Web in Visual Studio 2013 Update 2 and Beyond (Scott Hanselman and Scott Hunter)

This is an update of ASP.NET features and future directions. Now, it really starts looking like LEGO pieces. If you are Web Developer, definitely worth to see.

Modern C++: What You Need to Know (Herb Sutter)

This talk is an overview of new features of C++. There is also 10-20 minutes about performance. Recommended if you are not familiar with new C++ features yet. For me, this session could be shorter, and some things could be skipped.

The Future of C# [and VB] (Dustin Campbel and Mads Torgersen)

First part (presented by Dustin Campbel) is about Roslyn. There is demo how custom code diagnostics can be created. Second part (presented by Mads Torgersen) is about new language features. My observation is that they started adding weird things to the language syntax. More over, Mads talk also about Visual Basic (for ~5 mins), which - as he claims - has a future as well. Mads already had similar session on other conferences (dotNetConf, NDC).

Good introduction to Xamarin if you are not familiar with it. There is general overview and philosophy explained. There is also short demo. Good point to get started with Xamarin!

Anders Hejlsberg announced TypeScript 1.0. This session is an overview of TypeScript presented in a very solid way. Timestamped draft notes of the entire talk can be found here.

This session is worth to see at least for first 8 minutes when James is summarizing entire build conference :) The main content is good intro to Neural Networks. It awakened my desire to learn more about Artificial Intelligence and Machine Learning.

I've seen also: Building a Large Scale JavaScript Application in TypeScript (only slides, no code...), Building a Single Page Application with ASP.NET and AngularJS (I am not a fan of pasting large chunks of code during demos), Avoiding Cloud Fail: Learning from the Mistakes of Azure with Mark Russinovich (advanced, useful if you use Azure intensively), Building Modern Web Applications with Visual Studio and Web Essentials (just update in new Web Essentials features).

Next
C# in Nutshell ⏩