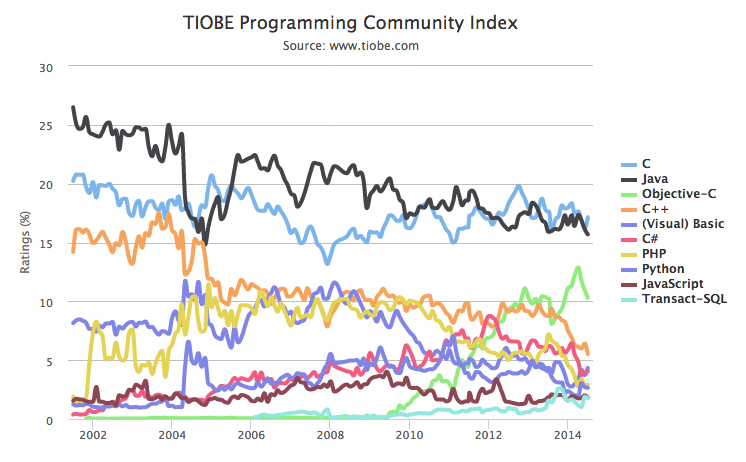 I am programming for more than 10 years. I realized that, when I found my first, personal home page (written in PHP) on my hard drive. Some files have last modification date: May 2003. Since that time I was working (or playing) with 9 of top 10 programming language from TIOBE Index list. As I mentioned, I started with PHP, then I learnt a little bit JavaScript (to create fancy menus or 'secret pages' on my website). In high school I started learning C++. At the University I learnt C, more C++ and Java. Then I learnt C# on my own, and it is still my favorite language. Along with C# I learnt ASP.NET and T-SQL (to be able to create websites with databases). I also learnt Python and Objective-C. Former became useful when I started my Research Assistant Job.

More experience I gain, more interested I am in how things work underneath the code level. In this post I want to provide short description of the Top 10 programming languages (by TIOBE Index), how they work and their super short history.

Interpreted language created by Rasmus Lerdorf. Originally, collection of Perl scripts, rewritten to C for performance reasons, ability to work with web-forms and communicate with databases. Most popular interpreter: Zend Engine. Since PHP 4, the PHP parser compiles input to produce bytecode for processing by the Zend Engine. Facebook developed two PHP interpreters: HipHop (transforms the PHP scripts into C++ code and then compiles) and HipHop Virtual Machine (converts PHP into a high-level bytecode, which is then translated into x86-64 machine code dynamically). Recommended book: PHP and MySQL Web Development.

C# is Microsoft's version of Java language created by Anders Hejlsberg. However, C# is closer to C++ in case of design and syntax. It is compiled to Intermediate Language (equivalent of bytecode in Java) and runs on Common Language Runtime (equivalent of JVM). C# also uses Garbage Collector. It has many features not existing in Java like rich native interoperability, query language (LINQ) or dynamic type. For more, check Comparison of C# and Java. Book for quick start: Sams Teach Yourself Visual C# 2010 in 24 Hours recommended by Eric Lippert (former developer of C# compiler). To dive in, check: C# 5.0 in a Nutshell: The Definitive Reference by Joseph Albahari and Ben Albahari, C# in Depth by Jon Skeet and CLR via C# by Jeffrey Richter.

Dynamic, interpreted language, created by Guido van Rossum. Most popular implementation: CPython (implemented in C). It compiles Python programs to intermediate code (.pyc files) and runs them on Virtual Machine. There are many other implementations, e.g. Jython, which compiles Python to Java Bytecode (.class files). Python is much more expressive language than C or Java. Some constructs, which needs 10 lines of C code or 3 lines of Java code, requires only 1 line in Python (check reverse words example in my post about Python). Python uses whitespace indentation, rather than curly braces or keywords, to delimit blocks. To get started I recommend Google's Python Class (videos section) created by Nick Parlante. Other resources: Python tutorial and Dive into Python. You can also check my post Python jump start for more details.

Strict superset of C language with object-oriented capabilities inspired by Smalltalk. Every C program can be compiled by Objective-C compiler, C code can be included within Objective-C code. Most popular compilers: Clang and LLVM. Instead of calling methods (like in C++: obj->method(param)), messages to objects are being sent ([obj method:param]) and resolved at runtime (not at compile time like in C++). There is no Garbage Collector (which works at run-time) in Objective-C, but instead Automatic Reference Counting (compile-time feature) is used. Objective-C is the main programming language used by Apple for the OS X and iOS. However, in this year Apple announced plans to replace Objective-C with new Swift language. Resources to learn Objective-C can be found in my other post.

Declarative language for managing data held in a relational database management system (RDBMS). Created by Microsoft (for MS SQL Sever), T-SQL is an extension to SQL, which makes it Turing complete. It adds to SQL: procedural programming, local variables, functions for string and date processing, mathematics etc. and allows FROM clause in DELETE and UPDATE statements (which allows joins to be included). T-SQL (and SQL) query differs from program in such a way that they just tell what to do, not how to do that. Figuring out how to execute query is a role of query analyzer. Check Understanding how SQL Server executes a query.  To learn T-SQL, you should learn SQL first. Recommended tutorial: T-SQL Step by Step Course (video tutorial). Recommended books: Itzik Ben-Gan's Microsoft SQL Server 2012 T-SQL Fundamentals and other his books.

Compiled language created by Microsoft. Compiles to native language or P-Code and uses the Microsoft C++ compiler to generate the executable. It derives from BASIC. Similar to Python: tabs and new lines are used to delimit blocks. VB (under Visual Studio) allows to create GUI using drag-and-drop technique. Last version (VB6) was released in 1998 and is abandoned in favor of VB.NET, which introduces many features (present also in C#), but still supported, even on Windows 8. Check Comparison of VB and VB.NET. Both (VB.NET and C#) run on the same run time (CLR). More details can be found here. Recommended tutorials to get started: Visual Basic Fundamentals: Development for Absolute Beginners by Bob Tabor and Visual Basic .NET Tutorials. Good reference is Visual Basic at Wikibooks. To get VB syntax highlighting in SublimeText, this package works.

I read about all 10 languages in Wikipedia before writing this post. I was surprised how much I could learn in 5-10 minutes reading. I don't know why, but I feel much better now, when I refreshed and organized my knowledge. If you want to start learning about new programming language, I recommend you to read about it on Wikipedia first. Even more, read about all languages you are using now on Wikipedia as well. It gives you great, high-level overview. Now, Wikipedia will be my start point of research about "some new thing".