Earlier this year I had a pleasure to speak at Wroc# conference in Poland. It was very well organized event that was almost free for attendees. The only cost was required donation to charity: PLN 150 (~$50).

There was only 1 track with awesome speakers lineup! I finally had an opportunity to meet Roy Osherove in person. I learned about unit testing from his book The Art of Unit testing. I'm currently reading his another book: Elastic Leadership - a lot of useful tips not only for team leaders! Among other speakers there were Scott Helme (Security Researcher) that uncovered some things about web security I have never heard about! Zan Kavtaskin gave great overview about building apps on Azure Cloud, Glenn Henriksen showed how on server-less computing works in Real-World, and Sander Hoogendoorn together with Kim van Wilgen shared their perspective on over-engineering development processes.

The conference venue was great. I would say it was the best setup I've even seen! There was one big room, divided into 3 parts: stage, chairs for audience and Mix&Mingle zone (AKA M&M). You could talk (in the Mix&Mingle zone), and still be able to follow presentations. Speakers' room was on the upper floor, but it was more like a balcony, from where you could listen to talks and overlook entire venue.

I delivered talk about building mobile apps with Xamarin. I shared what we have learned while building Azure Mobile App, which started as hackathon project, and later turned into official Microsoft product. The app got announced on the stage of //build conference last year. Along the way we learned how to properly architect Xamarin project for multiple platforms, where to do not take shortcuts, does and don'ts for CI/CD and testing.

There was a guy who put a nice summary of my talk: 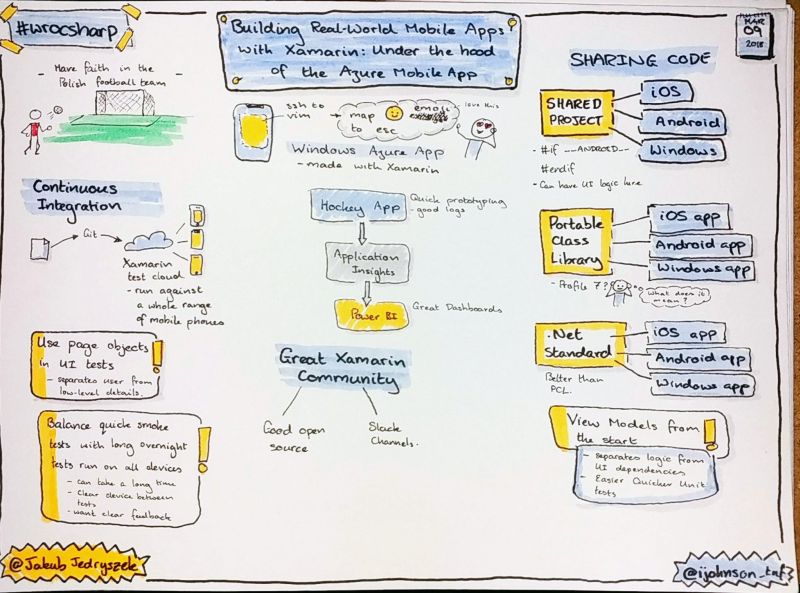 At the end of the conference there was speaker's panel where we were answering and discussing questions from the audience. We had good discussion about different aspects of software development from estimating project cost to writing unit tests. Almost every speaker had different background, and this made it even more interesting!

If you haven't been to Poland before: Wroclaw is an amazing city, and many of my foreign friends says it's their favorite city in Poland. Wroclaw is often refereed as WrocLove ;)

Last, but not least: thank you for everyone who made this conference happen!