What is the MARN stack?

Why Apollo Server instead of Express? Everything has its pros and cons. I like Apollo Server for its ease of setup, GraphiQL console (very useful during development), and support for many front-end frameworks. For more check out Comparison of Apollo Server with express-graphql.

In this article I will show you how to build end to end web app with React front-end, and Node.js backend with GraphQL API (powered by Apollo Server) and MongoDB persistence layer.

I created a video version of this guide:

Create new directory for your app:

Add script to run Apollo Server with nodemon to package.json:

GraphQL schema describes the shape of your available data.

GraphQL resolvers are responsible for pupulating data into fields in Schema.

The above code defines 1 field (hello) in GraphQL Schema, and the resolver function returns "Hello from Apollo Server" when querying that field.

If you go to http://localhost:4000 you should see GraphQL Playground where you can execute queries:

To call Apollo Server with Apollo Client module, we need to do two things:

Wrap React components with ApolloProvider component and pass ApolloClient instance to it:

To query the Apollo GraphQL endpoint we can use useQuery React hook provided by @apollo/client module.

Let’s create Hello React component that will perform a call to GraphQL API and display the returned result. We need to define a GraphQL query and pass it to useQuery. The neat thing about the Apollo server is the ability to directly copy/paste queries from the playground.

To make it work we need to update App.js with changes mentioned in previous section: initializing ApolloCLient and wrapping components with ApolloProvider:

This should display Hello from Apollo Server in the browser coming from GraphQL API!

So far, the query is pretty simple. Let’s make it more sophisticated by adding parameter name, and changing response to Hello ${name}.

To do that we need to modify GraphQL schema and resolvers in the backend:

Notice that we extract name param from the second argument of resolver function.

We can use GraphQL Playground to test it, and help us to generate the query with parameter:

We need to update our HELLO_QUERY. You can copy/paste the query from GraphQL Playground:

We also need to pass name variable to useQuery:

This should result in displaying Hello Jacob in the browser:

Before we move to the next section, let’s clean up our backend code by extracting schema and resolvers to separate modules.

Remove equivalent pieces of code from src/index.js and import modules instead:

This will set us up for the next section. You should always extract independent modules as much as possible to keep you code clean.

CRUD stands for Create, Read, Update, Delete. It’s a backbone on every web app. Except twitter. They didn’t support Update for a while xD

In this section, I’ll describe how to create simple CRUD for books. Every book will have title and year when it was published. Data will be stored in MongoDB. Web UI will have interface to display (Read), add (Create), edit (Update) and delete books through GraphQL API.

To start mongo on Mac (docs):

I recommend to use MongoDB Compass for working with data in MongoDB. It’s much easier than using MongoDB Shell (mongosh). Of course, if you prefer using mongosh, go for it.

To get started with Books Library, let’s create new database called marn and new collection called books. It can be done easily with Compass: 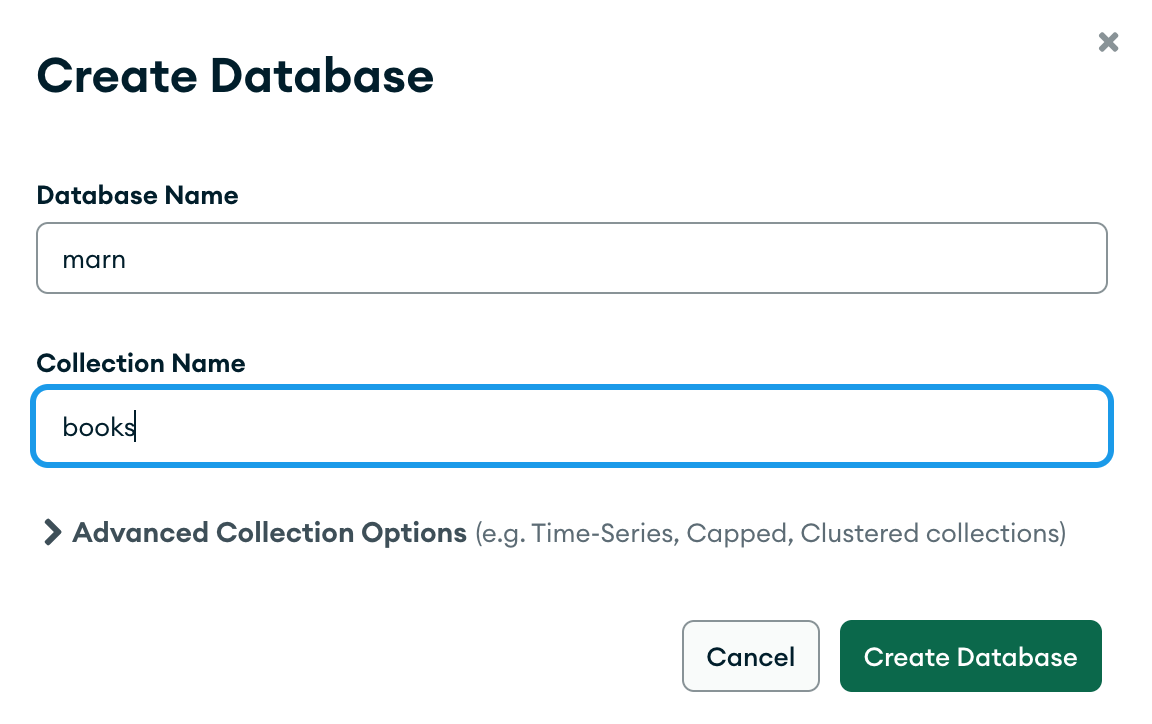 Connect to MongoDB from node.js

To connect to MongoDB from node.js we will use mongoose.

It has to be installed from Apollo Server directory:

To connect to MongoDB we can establish connection in src/index.js by adding this code:

Make sure your MongoDB uses port 27017. If not, update the uri. You can find the uri in Compass UI: 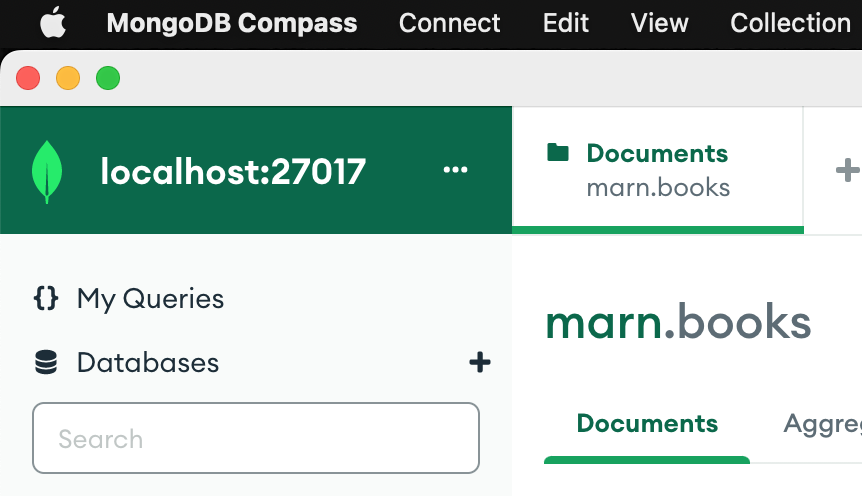 We can map MongoDB collections to JavaScript objects by creating models with mongoose. Create Book model in src/models/Book.js file:

We can query all books by simply calling the Book model:

To make data accessible through GraphQL, we need to add Book type to GraphQL schema and books query that returns array of Book elements in src/models/typeDefs.js:

We also need to add resolver that is querying MongoDB with mongoose in src/resolvers.js: 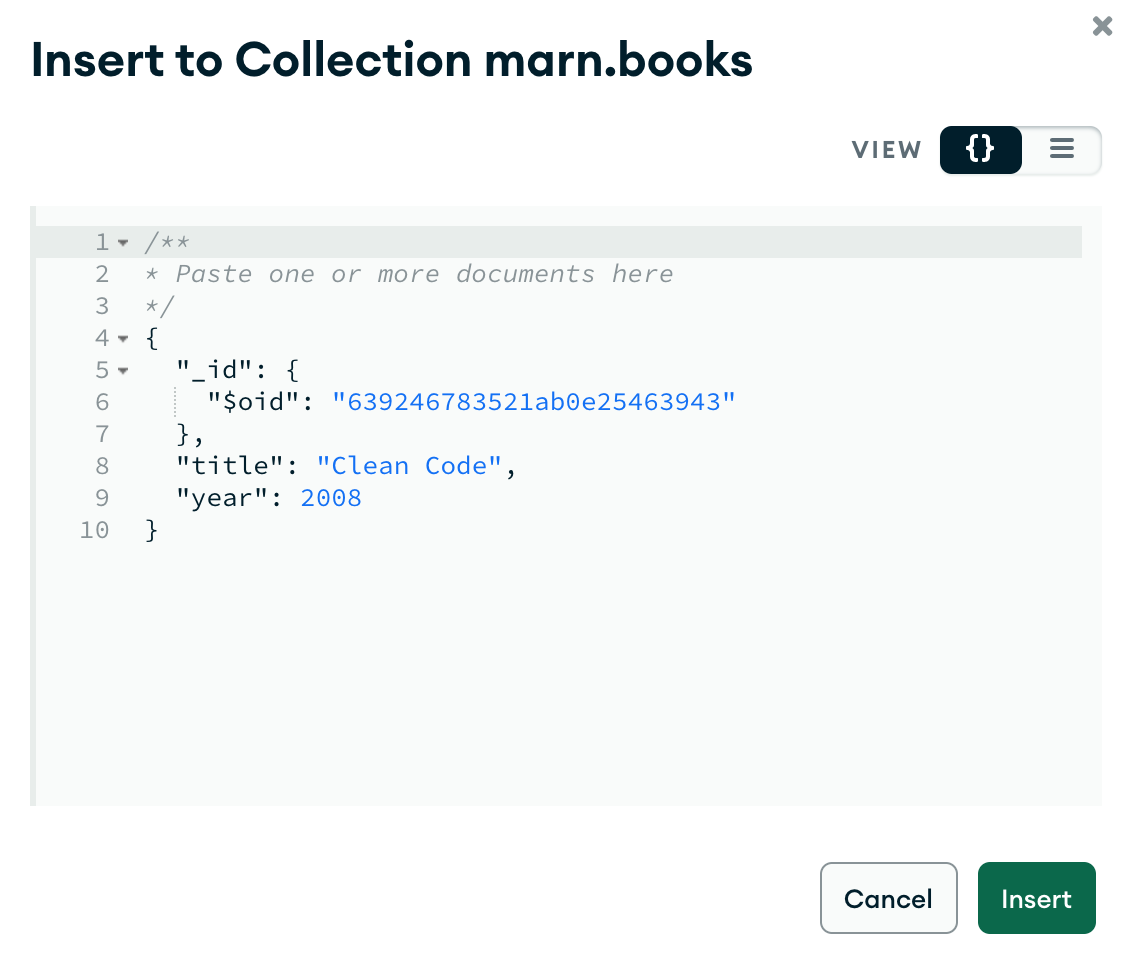 Once the book is added it should be returned in books query:

To display books, we will create two components:

The Books component will use the Book component to display all books from MongoDB. It will also fetch data from GraphQL API. We need to define GraphQL query (which we can copy form Playground), and query Apollo Server with useQuery. Create new file src\components\Books.js:

Import Books component in App component and display it on the main page:

When you go back to website you should see the book, which we added to database displayed in a table:

Before we start working on creating, deleting and updating books, let’s add navigation to our UI with React Router. This will allow us to separate different views instead of cluttering them on the same page.

First, we need to install react-router-dom in our React app:

We need to wrap all components in BrowserRouter, map routes to components, and add links allowing to navigate between routes.

All changes that needs to be done take place in src/App.js:

After that you should see the main page with navigation and links to home that displays Hello component, and link to books that displays the list of books from MongoDB in a table:

To insert a new book to MongoDB, we need to create a Mutation.

In GraphQL we can fetch data with Query, but to create or modify data, we need to create a Mutation.

Let’s start with updating schema. Mutations are in a separate block in the schema. We will add create mutation that takes title and year parameters, and returns Book object to src/models/typeDefs.js file:

We can test creating books with GraphQL Playground:

If everything went well you should see new book in MongoDB. Notice __v0 field in book inserted with Mongoose. This is versionKey property, which is set on each document when first created by Mongoose. 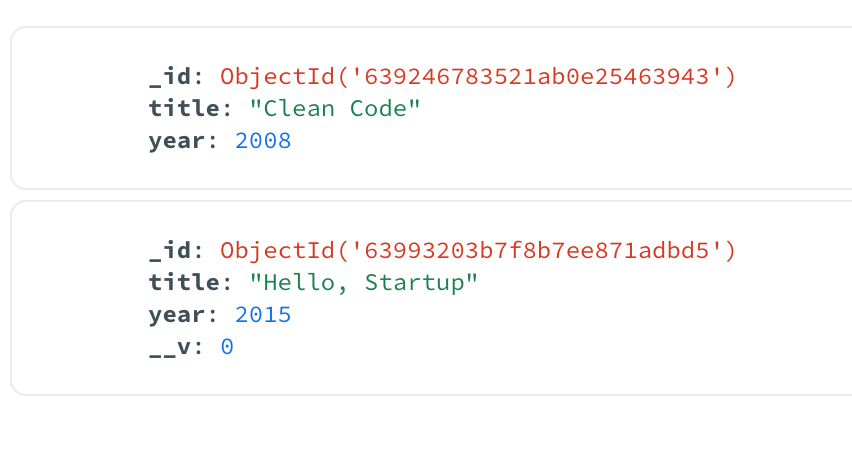 Let’s start with new CreateBook component. We need to create a new form to collect title and year, and call create mutation we created in previous section.

We will utilize useState hook to access input fields data (title and year).

To call mutation, we will use useMutation hook from @apollo/client.

We can get CREATE_BOOK_MUTATION from GraphQL playground.

We will also create a separate route /create to to display CreateBook component, and a link to that route. Update src/App.js:

You may notice that new book does not appear on the books list without refresh. There are two ways to fix it:

We will use refetch query approach, which is usually the best default answer, unless you really care about high performance.

This requires to pass a list of queries to refetch to useMutation hook:

As you can see, we need BOOKS_QUERY, which we already defined in Books component. To do not copy/pasta, let’s extract all GraphQL queries and mutations to src/graphql.js file:

Now you can remove BOOKS_QUERY variable from Books component and just import it from graphql.js:

Delete mutation will be very similar to create mutation from previous section. We just need a mutation that takes id of a book we want to delete.

Let’s update schema in src/models/typeDefs.js by adding delete mutation that takes id parameter and returns the same id if books is successfully deleted:

And implement resolver function in src/resolvers.js:

We can test deleting book in GraphQL playground by grabbing an id from MongoDB Compass:

If we try to delete book that doesn’t exist we should get null in response:

We have our backend working. Let’s add delete functionality to UI.

Add delete mutation to graphql.js (you can copy/paste from GraphQL Playground):

We will add delete button to Book component, and call delete mutation from there:

We also need to add new column to table header in Books component:

Clicking delete button should delete book from MongoDB and from delete row from books list table:

Editing is almost like creating. You need to pass id of an existing book in addition to title and year.

And resolvers, by implementing edit mutation:

To enable editing from UI, we will add an edit button to Book component. It will change text to input fields when in editing mode, and display save and cancel buttons to commit or discard changes.

Now, you should be able to edit books inline:

To make sure that everything works as expected, you can double check if books are being properly created, deleted and updated in Mongo with MongoDB Compass.

Congratulations! Now, you know how to build web apps with MARN stack!

You can find entire code in this github repo: https://github.com/jj09/marn.

I also recorded a video version of this guide:

To dive into MongoDB check out MongoDB CRUD Operations and mongoose API. Once you learn how to write Mongo queries with MongoDB Shell, you don’t really need to go over mongoose API as it’s almost identical.

If you are new to React, I recommend React Docs and ReactJS Crash Course.

You can very easily swap different components for MARN stack. E.g., swap React with Vue.js like I did for this demo project.

Previous
⏪ I am an Ironman!